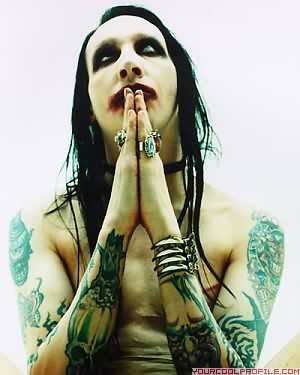 It is sad to think that the first few people on earth needed no books, movies, games or music to inspire cold-blooded murder. The day that Cain bashed his brother Abel’s brains in, the only motivation he needed was his own human disposition to violence. Whether you interpret the Bible as literature or as the final word of whatever God may be, Christianity has given us an image of death and sexuality that we have based our culture around. A half-naked dead man hangs in most homes and around our necks, and we have just taken that for granted all our lives. Is it a symbol of hope or hopelessness? The world’s most famous murder-suicide was also the birth of the death icon — the blueprint for celebrity. Unfortunately, for all of their inspiring morality, nowhere in the Gospels is intelligence praised as a virtue.

A lot of people forget or never realize that I started my band as a criticism of these very issues of despair and hypocrisy. The name Marilyn Manson has never celebrated the sad fact that America puts killers on the cover of Time magazine, giving them as much notoriety as our favorite movie stars. From Jesse James to Charles Manson, the media, since their inception, have turned criminals into folk heroes. They just created two new ones when they plastered those dipshits Dylan Klebold and Eric Harris’ pictures on the front of every newspaper. Don’t be surprised if every kid who gets pushed around has two new idols.

We applaud the creation of a bomb whose sole purpose is to destroy all of mankind, and we grow up watching our president’s brains splattered all over Texas. Times have not become more violent. They have just become more televised. Does anyone think the Civil War was the least bit civil? If television had existed, you could be sure they would have been there to cover it, or maybe even participate in it, like their violent car chase of Princess Di. Disgusting vultures looking for corpses, exploiting, fucking, filming and serving it up for our hungry appetites in a gluttonous display of endless human stupidity.

When it comes down to who’s to blame for the high school murders in Littleton, Colorado, throw a rock and you’ll hit someone who’s guilty. We’re the people who sit back and tolerate children owning guns, and we’re the ones who tune in and watch the up-to-the-minute details of what they do with them. I think it’s terrible when anyone dies, especially if it is someone you know and love. But what is more offensive is that when these tragedies happen, most people don’t really care any more than they would about the season finale of Friends or The Real World. I was dumbfounded as I watched the media snake right in, not missing a teardrop, interviewing the parents of dead children, televising the funerals. Then came the witch hunt.

Man’s greatest fear is chaos. It was unthinkable that these kids did not have a simple black-and-white reason for their actions. And so a scapegoat was needed. I remember hearing the initial reports from Littleton, that Harris and Klebold were wearing makeup and were dressed like Marilyn Manson, whom they obviously must worship, since they were dressed in black. Of course, speculation snowballed into making me the poster boy for everything that is bad in the world. These two idiots weren’t wearing makeup, and they weren’t dressed like me or like goths. Since Middle America has not heard of the music they did listen to (KMFDM and Rammstein, among others), the media picked something they thought was similar.

Responsible journalists have reported with less publicity that Harris and Klebold were not Marilyn Manson fans — that they even disliked my music. Even if they were fans, that gives them no excuse, nor does it mean that music is to blame. Did we look for James Huberty’s inspiration when he gunned down people at McDonald’s? What did Timothy McVeigh like to watch? What about David Koresh, Jim Jones? Do you think entertainment inspired Kip Kinkel, or should we blame the fact that his father bought him the guns he used in the Springfield, Oregon, murders? What inspires Bill Clinton to blow people up in Kosovo? Was it something that Monica Lewinsky said to him? Isn’t killing just killing, regardless if it’s in Vietnam or Jonesboro, Arkansas? Why do we justify one, just because it seems to be for the right reasons? Should there ever be a right reason? If a kid is old enough to drive a car or buy a gun, isn’t he old enough to be held personally responsible for what he does with his car or gun? Or if he’s a teenager, should someone else be blamed because he isn’t as enlightened as an eighteen-year-old?

America loves to find an icon to hang its guilt on. But, admittedly, I have assumed the role of Antichrist; I am the Nineties voice of individuality, and people tend to associate anyone who looks and behaves differently with illegal or immoral activity. Deep down, most adults hate people who go against the grain. It’s comical that people are naive enough to have forgotten Elvis, Jim Morrison and Ozzy so quickly. All of them were subjected to the same age-old arguments, scrutiny and prejudice. I wrote a song called “Lunchbox,” and some journalists have interpreted it as a song about guns. Ironically, the song is about being picked on and fighting back with my Kiss lunch box, which I used as a weapon on the playground. In 1979, metal lunch boxes were banned because they were considered dangerous weapons in the hands of delinquents. I also wrote a song called “Get Your Gunn.” The title is spelled with two n’s because the song was a reaction to the murder of Dr. David Gunn, who was killed in Florida by pro-life activists while I was living there. That was the ultimate hypocrisy I witnessed growing up: that these people killed someone in the name of being “pro-life.”

The somewhat positive messages of these songs are usually the ones that sensationalists misinterpret as promoting the very things I am decrying. Right now, everyone is thinking of how they can prevent things like Littleton. How do you prevent AIDS, world war, depression, car crashes? We live in a free country, but with that freedom there is a burden of personal responsibility. Rather than teaching a child what is moral and immoral, right and wrong, we first and foremost can establish what the laws that govern us are. You can always escape hell by not believing in it, but you cannot escape death and you cannot escape prison.

It is no wonder that kids are growing up more cynical; they have a lot of information in front of them. They can see that they are living in a world that’s made of bullshit. In the past, there was always the idea that you could turn and run and start something better. But now America has become one big mall, and because of the Internet and all of the technology we have, there’s nowhere to run. People are the same everywhere. Sometimes music, movies and books are the only things that let us feel like someone else feels like we do. I’ve always tried to let people know it’s OK, or better, if you don’t fit into the program. Use your imagination — if some geek from Ohio can become something, why can’t anyone else with the willpower and creativity?

I chose not to jump into the media frenzy and defend myself, though I was begged to be on every single TV show in existence. I didn’t want to contribute to these fame-seeking journalists and opportunists looking to fill their churches or to get elected because of their self-righteous finger-pointing. They want to blame entertainment? Isn’t religion the first real entertainment? People dress up in costumes, sing songs and dedicate themselves in eternal fandom. Everyone will agree that nothing was more entertaining than Clinton shooting off his prick and then his bombs in true political form. And the news — that’s obvious. So is entertainment to blame? I’d like media commentators to ask themselves, because their coverage of the event was some of the most gruesome entertainment any of us have seen.

I think that the National Rifle Association is far too powerful to take on, so most people choose Doom, The Basketball Diaries or yours truly. This kind of controversy does not help me sell records or tickets, and I wouldn’t want it to. I’m a controversial artist, one who dares to have an opinion and bothers to create music and videos that challenge people’s ideas in a world that is watered-down and hollow. In my work I examine the America we live in, and I’ve always tried to show people that the devil we blame our atrocities on is really just each one of us. So don’t expect the end of the world to come one day out of the blue — it’s been happening every day for a long time.

This entry was posted on Friday, July 23rd, 2010 at 10:33 and is filed under Επιρροές, Ιστορίες, Κοινωνία. You can follow any comments to this entry through the RSS 2.0 feed. You can leave a comment, or trackback from your own site.